John Bowles in 211 attracted a lot of attention when he as first amateur qualifier in the UK Open reached the last 16 beating Peter Manley, Devon Peterson, Justin Pipe and Steve Beaton. Since 2012 he plays the complete PDC circuit and qualified by the PDC World Championship qualifier for the PDC World Championship 2012. He played himself in the second round where he lost in a very close and memorable match to Gary Anderson. In 2013 he qualified for several events of the PDC European Tour, stood once in the semi-finals of an UK Open qualifier and reached the quarterfinals of a Players Championship.
Bowles, who was once rugby pro, is sponsored by the Darts Performance Centre and his own signature performance darts just went on sale. You first appeared in the limelight in the UK Open 2011 - was that your first big tournament?

I had qualified in 2010 as well but lost my first match. I had qualified by a Riley qualifier. There were so many participants I had to play through two sessions to win the only available spot.

Did you play BDO before?

I played in a few BDO tournaments. But after I had played my first UK Open I knew where I wanted to play. Not that the BDO tournaments were badly organized or something like that. They all had a vast number of participant. So it felt always chaotic. In 2011 I decided to give the PDC a try ,entered qualifying school 2012 and won my tour card.

How long have you played darts?

You played Rugby before - as a professional?

Yes I was a professional for almost 20 years.

And where did you play and in which position?

Widnes - and I was a second forward - some kind of a link position. I liked it very much. And have you got a profession as well?

I am a builder.

Rugby and Darts are totally different sport - was it difficult for you to get into darts?

Not really. I've learned a lot about mental strength playing Rugby which helped me playing darts.

Another big difference is that Rugby is a team sport and in darts you are on your own. What do you like better?

I like both. But I still can't watch Rugby on TV as I would still love to be involved!

When you joined the PDC and started to play the circuit did you have a problem with all the big names?

I had no problems with big names. I was used to play big names from my time as rugby player.

How long would you estimate did it take you to settle in the circuit?

It was not easy in the beginning. I would say it took me around two months.

And was it difficult for you to play on the big stage?

I had no problem with the big stage. You've to blend out things like the light and the noise. But you can learn that.

You are now sponsored by the Darts Performance Centre - what do you think about sports science in darts?

It's just great. They did a video analysis of my throw. That really is astonishing! You can see with the help of a laser beam the way your dart is moving and what would be the ideal curve. So you can really see what's going wrong and by analysis you find out what to change in your throw to be really able to throw three identical darts!

As a rugby player you probably were used to sports science methods in practice?

Yes - there we worked a lot with video analysis as well. We had a look at our matches and discussed what we did and what our opponents did so we knew what to work at. 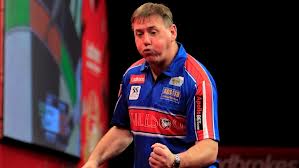 Would you say sport science methods you helpful in darts as well?

I really would recommend every darts player a video analysis of their throw!!

Do dart players ever talk about their practice or is it some kind of a personal secret?

We talk sometimes about it during warm up or so. But it's more bits and pieces.

What I found out in practice is that it really helped me to build up consistency. When I started to play the circuit it happened I had some really good first legs and then my concentration left me. In practice it was the same - I just couldn't manage to concentrate for longer periods either. So that was the first I tried - to put in longer practice sessions. By managing those I am now able to concentrate longer in matches as well.

For how long do you practice?

Oh - I think I practice around four hours now every day. I start with a long warm-up - might be three quarters of an hour, than do "real" practice for around an hour , than take a break, have a drink , start again with a shorter warm up, some more practice, another break and another one hour of practice.

And that every day?

Yes- you see that's my profession and I have to do it!

Do you prefer to practice alone or with a partner - you probably were use to practicing with a team?

Most of the time I practice alone but I've practiced with other players too for example Michael Smith. Then practice is more competitive. And on days I play league I sometimes scrub practice at home.

Is it difficult to motivate yourself for practice?

No not at all because I can still see I get better and I want to get better - that's my motivation.

Do you think having a coach would be helpful?

No - I think one can do without a coach in darts. Sometimes Paul from DPC gives me advice or I talk with him about my practice. But I feel I've got a very analytical mind myself though sometimes it's better not to think too much about everything and just let it happen. Then all seems to come easily, in contest as well. 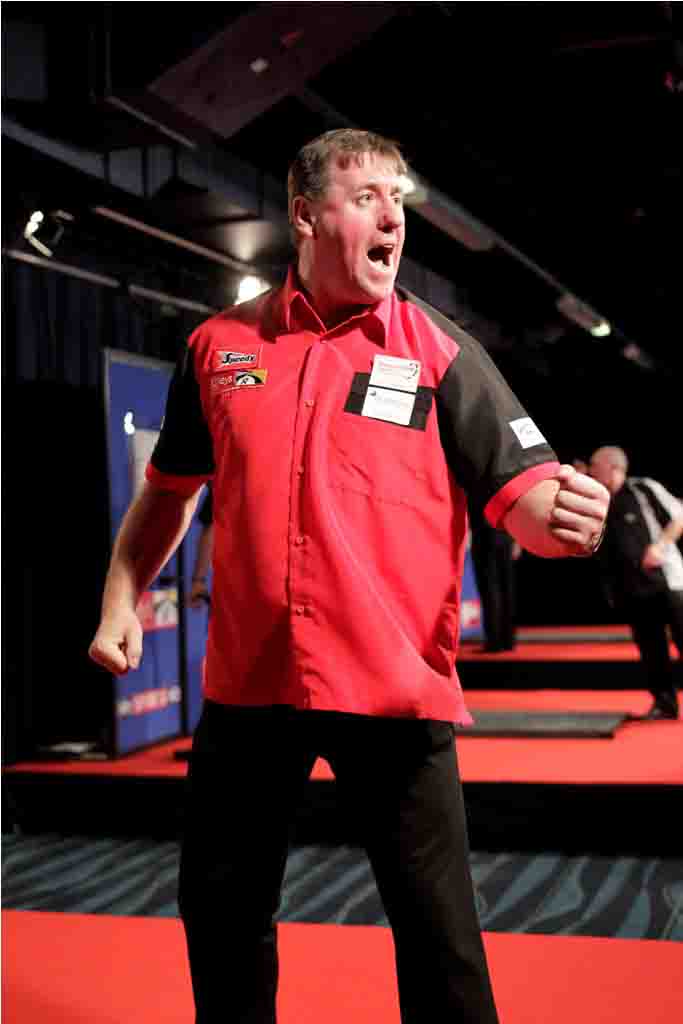 And what exactly do you practice?

Well - most important part of my practice is the finishing between 80 and 100. If I've not been able to hit one I always have to start from the 80 again. I often get to 97 which is a three dart finish but then have to go back all the way again because I don't manage any further.
Something else I do for finishes is to throw two darts at the triple 20 or 20 segment and then use the third dart for a double starting with double 1 around the board. This is the same as the other game - if I miss a double I start with the double 1 again. To keep my mind busy I change the order of the doubles - it will not be 1, 2, 3 but 1, 5 3 or so.
And of course I play 15 dart legs. They have to be finished in 15 darts or I have lost. Of course fewer than 15 darts are best!

For you are tactics or preparation in any way relevant depending on who your opponent will be?

No I always play the board. It's of no importance at all who'll be or is my opponent

What do you do for your fitness?

Not really very much. I tried weight lifting but that turned out to harm my throw. Other players for example Arron Monk are very much into weight lifting. I go to the gym from time to time and the cardio.

Do you think of darts as a sport?

I would say darts is a real sport - not really physically though you walk quite a lot but it is very exhausting mentally.

What are your goals and how good do you think you can get?

I think goals are very important! I have several goals - I of course want to be back in the Ally Pally. I want to get and to stay in the top 64 as I really don't want to have to go back to qualifying school - it was really hard to get through. And then of course I want to climb up higher in the rankings. We will see how far I can get!

One of the big problems in darts is to handle disappointment. What do you do after a loss?

Probably you should treat it as not being that different to a win. One should always find out what went well and what not. You definitely learn more by a loss. But of course I feel very disappointed nevertheless.

What for you are the characteristics of a really good player? And how much do you think is talent and what can you achieve by work?

Well - you of course need mental strength and the determination to win. To never give in is very important too - I was very often far behind in a match and was able to turn the game around. You need that bottle. A positive mind set Is very important too!
There are enough players who think they've got the talent and don't need to practice. But that ends in stagnation - there'll be no progress.

What darts do you use?

I've got my own signature performance darts. They will be on the market soon. You can see they look like the performance darts but the surface structure is a little bit different. That is important for me because I can feel it and always grip the dart at the same place. A consistent grip helps to make the throw consistent too.

What do you think is your special strength and what are the areas for you to work at?

Probably my mental strength and what really for me still is a problem that's finishing. I've no problem with scoring, but my finishing sometimes lets me down.

Would you say darts player is some kind of dream job for you?

For me it is. What fascinates me most is probably the competition. That really appeals to me. And the possibility to get better and better. To really bring the best out of me.

Do you still have any spare time at all? And what do you do to relax?

I don't have a lot of spare time and no time for hobbies either. But I am interested in watching other sport on TV.

And when you are on holiday?

I would never travel without my darts! And during the PDC summer break I play as well. The whole family once went to a pub during this break but after I had won everything they didn't allow me back...