Canadian Jim Long for many years only took part in tournaments in his home country. In 2017 he played two events of the Championship Darts Circuit and in 2018 played the complete series of ecents. After the season he was the highest ranked Canadian player in the CDC ranking and by this qualified for the PDC World Championship 2019. 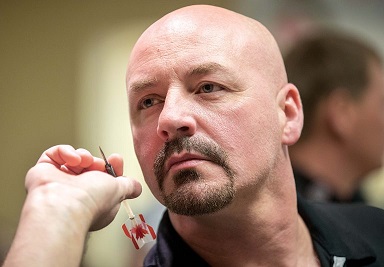 I started playing darts when I was 19 years old.

How did you get into contact with the sport?

I went to my local tavern one night to play pool and everyone was playing darts. They were one player short for a blind draw so I played. I had to borrow darts of course!

Did you teach yourself or did you have a coach or older and experienced players to help you on?

No I never had a coach or anything like that but I was always asking the top players for tips and advice.

How popular is the sport where you live?

The new smoking laws that came into effect hurt the amount of players that were coming out but that has turned around in recent years. It's always been a very popular sport with a very large league in the city I live in.

And how John Part comes into play? Do you feel he made playing darts more popular in Canada?

The impact that John Part has had on Canadian darts is huge. It's always been a popular sport but seeing a Canadian winning a world championship, on that stage against Phil Taylor in his prime, gave other players hope that they could achieve this as well. Lots of guys go over to get there tour card and try to make a profession of darts because of what John has accomplished.

Do you play league or for a team?

Yes I play on a league team here in London Ontario. It is a singles and doubles league.

Is more soft- tip or more steel-tip played where you live?

As of right now there is no soft tip darts in London.

Do you play both? And what do you prefer?

No I do not play both.

Do you play mostly in Canadian tournaments or everywhere in North America?

Before the CDC I only really only played in Ontario. For me to go to most other provinces in Canada I would need to fly and it is quite expensive.

You are ranked 14 in the National Darts Federation Rankings - what was your best ranking place so far?

I actually have no idea! I've never been one to keep track of that kind of thing!!

And what was your biggest success?

Back in 2013 I won the PDC Canadian Masters in my hometown. And this past June I won the national federation of Canada singles and doubles.

Do you play for the Canadian National Team?

No I do not. There are qualifying tournaments during our Nationals to make up the team and I have never played one of them.

When did you start to play Championship Darts Circuit?

I went to my first championship darts circuit event last May because it was close to my hometown. I was only able to play two weekends that year but decided I would play this whole season.

Did you have to qualify for it?

There are 48 card holders, and 16 qualifiers in every event. If you are not a card holder you have to go to the morning tournaments to try and qualify to be in the top 64.

What about the quality of the players on the Championship Darts Circuit - would you say they are the best North American players?

Yes and no. The players that play are great but there are many many great players that don't play the CDC. I was lucky that I could drive to all of the weekend events this year. If I had to fly I probably wouldn't have played.

And who is for you the number 1 player in North America?

Well Jeff Smith won the North American qualifier! I realize though that many players didn't make it to Las Vegas to qualify including last year's champion.

Did you win one of the events and how hard is it?

No I did not win any of the events. I lost in the finals to Chuck Puleo on the first weekend in Chicago.

How many players normally take part in the events?

There are supposed to be 64 players in the main round but turn out varies from city to city.

Do you travel to all the CDC events?

I did this year yes, accept the match play tournament which was held in Nashville. But it did not go towards standings.

And would you say playing the CDC events helped you to improve your game?

Yes the CDC has definitely been great. Playing great players longer format once a month with something on the line is just great practice.

Travelling to take part in tournaments is a big issue with the distances in North America - how many weekends of the year you are on the road?

Honestly this is the first year I have ever really traveled around to tournaments. My job had me working 6 days a week for the last 10 years. This year I was travelled roughly 8 weekends,

I suppose you are no full time pro but would it be possible to earn a living with playing darts in North America?

No I don't think it would be possible to make a living playing darts in North America. The majority of the tournaments are multiple events per day and lower payouts.

What is your occupation?

I have worked for the last 28 years for general motors in an auto manufacturer Assembly plant.

Playing the CDC full time this year has led me to practice more than ever. I've never had a practice routine or schedule. I've tried to develop one this year.

I spend a lot of time on consistent mechanics on the triple 20 and the most used doubles.

I prefer to practice on my own although meeting someone for an hour to just play 501 games is great practice. My son Zachary and I will play doubles against the dart connect Android app also.

Will you practice more before the PDC World Championship?

Once I found out I was going to the PDC world championship I have been practicing like crazy! I've actually had to cut back a little bit because I will play every minute of the day if I don't stop myself!

Will there be any special preparation for the event?

I'm just trying to not make too big a deal of it which is almost impossible of course.

Have you any experience playing on stage? Or are most tournaments in Canada and the USA you take part floor events?

Our provincial championships and national championships are on the stage. I have played both of those but maybe 50 people are still there watching at the end. It is not like a big fan base game here in North America. All of our regular tournaments are floor vents only.

Are you looking forward to the Alexandra Palace or do you feel a little bit apprehensive as well?

I am a little terrified actually! Playing great players is not uncommon but being in front of that big of crowd, the best fans who love darts is the biggest privilege of going to the world championships. That said I am looking forward to being on that stage in that historic building.

Is there a player among the PDC players you really would love to play during the tournament?

No there is not one specific person I would like to play. Playing any professional will be very cool.

Do you know some of the PDC players already?

No I do not know any of the PDC players. I have met some of them and even played a doubles game with Phil Taylor (15 darter by the way) before he was a world champion. The professional players used to come to my hometown of London and I chatted with Peter Manley there.

Are you usually especially nervous when you play against well-known players?

No I think it's just the opposite because you're expected to lose to the top players which takes all the pressure off.

What do you hope to achieve in the World Championship?

I just hope to play good and be a good representative of the CDC. Playing at the Alexandra palace never would have being possible without them.

Would it be an option for you to take part in the PDC Qualifying School and try to get professional?

Not for the next 2 years that's for sure. I am only 2 years away from retirement after that it would be pretty exciting to try. I know I keep track of the North American players that do go to the q school.

Yes I just got my first sponsorship starting November 1st. One80, L-style and a local store called Smurf darts.

What darts do you play?

Right now I am using the Winmau Stratos darts 23 gram. Soon I will be switching over to one80 darts.

And are you a player who always tries to tune his set-up?

No not really but I do change my darts quite often and have roughly 40 sets at home.

What for you are the requirements to become a good darts player?

Good mechanics, know your math and your breakdowns and good focus.

As I and most European dart fans don't know you at all - how would you describe yourself?

I'm a family man, married with three kids. My wife goes to all the tournaments with me, and two of my kids will be coming to England. I would consider myself quiet and humble.

What are your strengths and - should you have any ? - your weaknesses?

My strength and my weakness are the same thing for me and that is my focus.

I don't have a favorite double.

For me here in North America playing as an amateur I like the fact that it's a social game with people that you see once or twice a month at a tournament. There is a great element of competition and trying to win against someone else. I have always joked with people who don't play darts that it is the best game in the world, it is inexpensive, play all year round indoors, does not matter what your skill level is it's fun to play players at similar levels to yourself, and you can have any number of players.

Do you do anything for your fitness as well or might be other sports?

No I don't play any other sports or go to the gym or anything like that.

Have you been to England and London before and is there anything you are looking forward to beside the World Championship?

I've never been to London England. We are looking really looking forward to the experience of being in England for the first time.

For how long will you stay and will you do some sightseeing as well?

We have rented a flat for 12 days. We plan on doing as much sightseeing as possible!

Have you got any interests and hobbies outside of darts?

Not really no, spending time with my family mostly. 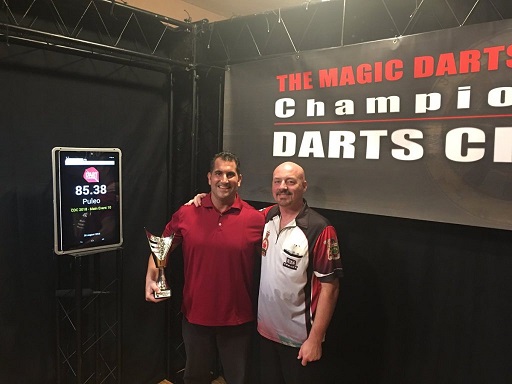