Colin Lloyd is to be sure one of the best-known players PDC Circuit and as a Top 16 players takes part in all Major tournaments though he all in all slid down the rankings a little bit in the last few years.
Lloyd plays since 1999 in the PDC and played in all Major tournaments over the years, even Premier League. He won two of them: 2004 the World Grand Prix in Dublin, 2005 the World Matchplay in Blackpool. He didn't play the World Championship with a lot of success, only in 2002 he reached the semi-finals, where he lost to Peter Manley. He often reached the last rounds of the Pro Tour Events and more then once had to play Phil Taylor in the finals...and lost. Between 2005 and 2007 and only with a short break he was the Worlds number 1. Today he sits on rank 13 of the PDC Order of Merit.
Colin usually is a friendly and affable person who doesn't easily lose his good mood. But during the World Championship 2011 he got fined because during his match against Andree Welge he punched the board on stage out of frustration.
What you will not know when you only know Colin Lloyd from TV is that he loves talking to people. And he is a very good dialogue partner, it never gets boring to talk to him. He's got a very lively mode of expression and I almost felt I was sitting beside the bleary-eyed Colin at the kitchen table or I would be one of the aquaintances invited to a cosy evening with his girlfriend and him. 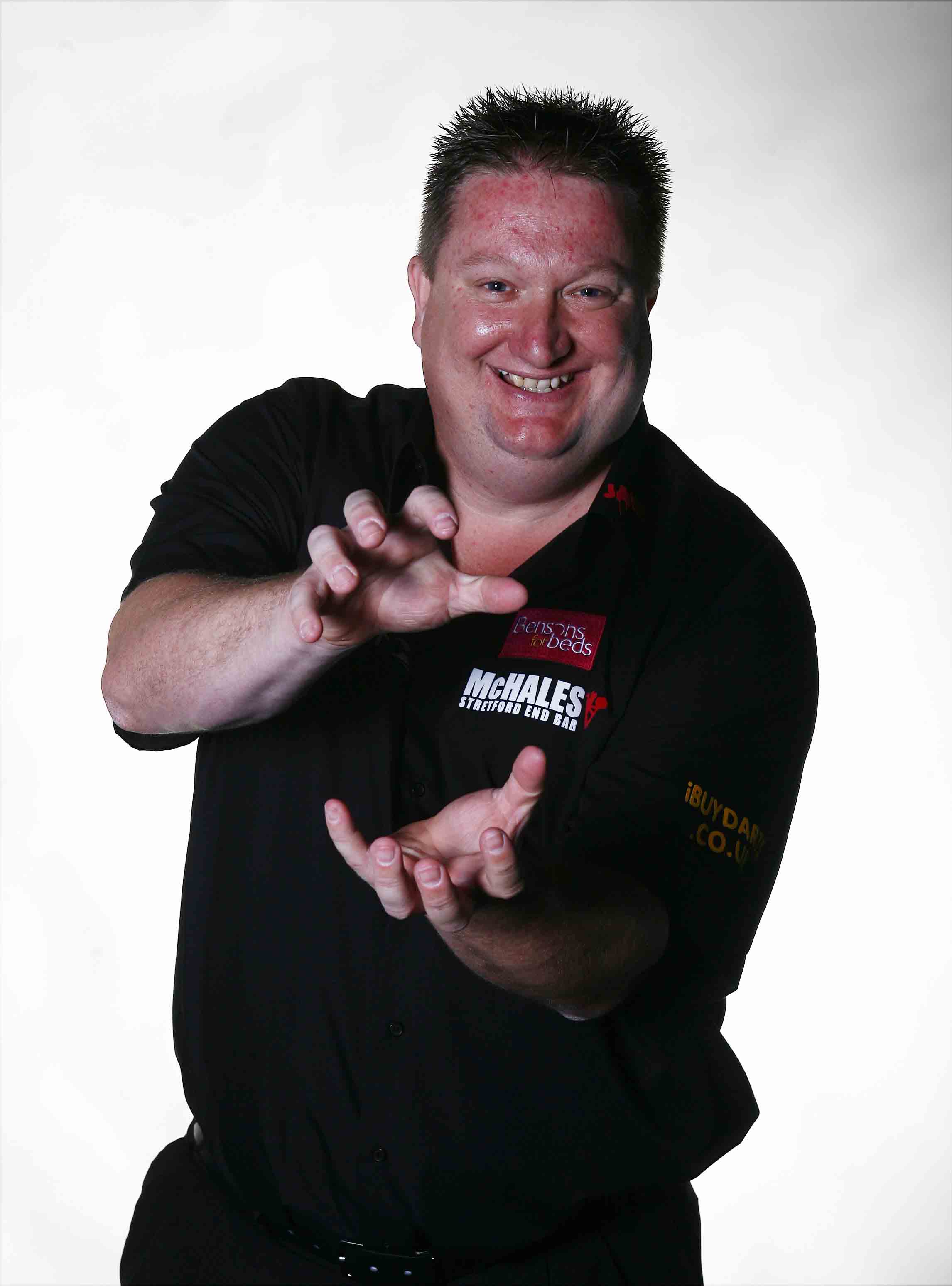 Colin, you are one of the popular PDC players for some years already - when did you start to play darts? And did you ever play in the BDO?

I was 11 years old when I started but I never really played BDO. I played locally, later county darts - that's of course BDO but not really in the BDO.

Had you any role models when you started to play?

Now - I think you can't say a role model, somebody I put on a pedestal. Of course I knew all the legends and I knew all about them - and I always wanted to beat them one day!

Was it an easy decision to become a darts pro?

Well - you have to find out what's for you. I remember there were only one or two teachers who supported me - teachers seem to often want the pupils to be something else. But one has to accept what a person wants to be or wants to do. I am what I wanted to be and I enjoy it. I am what I am and what I do is really my thing.

You always come over an amiable person - do you sometimes feel pity for an opponent? Or are all personal feelings gone when you stand at the oche?

Well, you see I often think this handshake and wishing your opponent the best is some kind of hypocrisy or at least near it. You can see that in the eyes of your opponents - you sometimes can really see hatred in the eyes. When this happens I stop to be amiable and get wicked. You can see that when I grin. When I get this grin on stage I am really dangerous. I can't stand hypocrisy at all. It happens that I think knickers to you and I'll have the last laugh.

Over the years a lot of strong BDO players switched to the PDC - would you say competition is getting harder and harder?

That's nothing what really bothers me. But I think that of course the money lets that happen but I keep on doing what I always do. I myself don't mix in this politics. I've no problems with the BDO players at all. I know most of them, I often play exhibitions with them for example with Martin Adams for Rileys. I told him the same - I don't mix with politics.

What do you think a player needs to really have success?

Mostly hard work I would say. A lot of practice, you really have to hang in with your hard and your head and of course you need balls too.

Do you like playing on stage and what for you makes the difference between stage and floor?

For me it doesn't make a big difference at all. I just love to play darts - whether on stage or on the floor doesn't matter for me.

Does the crowd distract you? Or is it more support?

I love the crowd though I did get my share of boos!!

Is there anything in being a "star" what you not really like?

What I really don't like are those reporters who don't let you any time after a loss. They turn up, hold a micro at you and a camera at your face and ask questions you really can't answer. Why don't they let you recover first for a few minutes. No one like to lose. It always takes me some time to recover.

Do you think in team sports it's easier then in such an individual sport?

No I don't think that would be easier. Of course you would have a team to support you but on the other side there'll always be intrigues or jealousies. Here I have it all on my own shoulders but in my own hand as well!

I often watched you playing Phil Taylor in the final of a Pro Tour event and even thoug you dominated all opponents before that final it looked you just couldn't produce against Phil. Is he some kind of a bogey-opponent for you?

That's true - I really played him often and sometimes I even won though never in a final. I admit that certainly is a mental problem for me. But I can't say he is doing something.

Wayne Mardle mentioned in his book you both played youth together?

Oh yes, we always played together and his wife Donna too. We know each other for a long time.

Have you any idea why he slided in such a crisis?

I think he lost it a little bit but I don't mix in. I only told him when it began I didn't think it a good idea to take a break for a year as he intended. No sports at this level can do it and in darts it is the same. 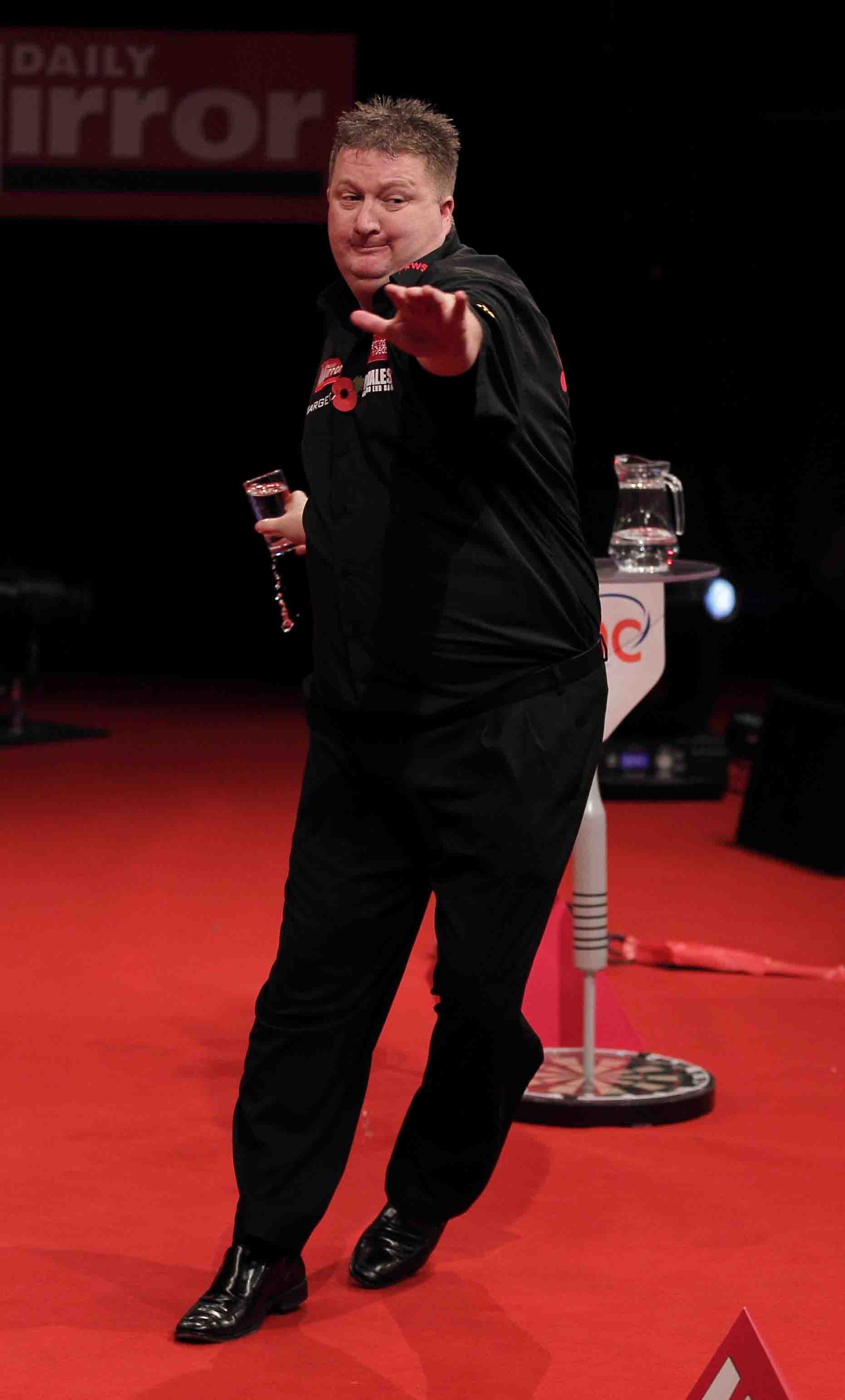 Around the time you were diagnosed with diabetes you yourself were in some kind of a slump. Was the illness the reason for this?

No - I somehow lost confidence and had to work hard to rebuild it.

You seem to be back - is the illness still an issue, does it affect you?

I don't feel anything at all not even that I get tired faster - nothing. I of course know now that I've to eat in between to keep up the blood sugar level.

And alcohol? I think alcohol is not allowed.

I know - I know. But I really need a few drinks to relax. My doctor is not really happy with that but I told him the consequences don't really matter for me. I live and enhjoy now - that is what counts for me.

And what about the food? What is offered at the venues is nothing near healthy food.

Yes that's of course another point my doctor is not happy about. But I love food especially home cooked food by my girl friend. And what really could I eat? Potatoes are not good because of the sugar, meat is not good. But at least I am not one for the sweets!

A lot of dart players now-a-days seem to be interested in more "professional" ways like using sports psychology , relaxation techniques, mental coaches - what about you?

Yes you hear quite a lot about it but I always think I know very well what I do and how to overcome my problems and difficulties. Why should I pay somebody else for it. I think by now I really know what works for me.

Part of the "new ways" is always physical fitness - do you "work" at your fitness?

Oh yes!!! I never was anything near an athlete but I love walking and my girld friend always is after it. Where we live there are a lot of small ponds and we can take beautiful walks. I love it outside. And she sticks to her guns. Even when I had an exhibition and don't feel like it and loiter bleary eyed at the kitchen table and almost can't keep my eyes open she shoos me upstairs to dress and in no time at all we are out for an hours walk. 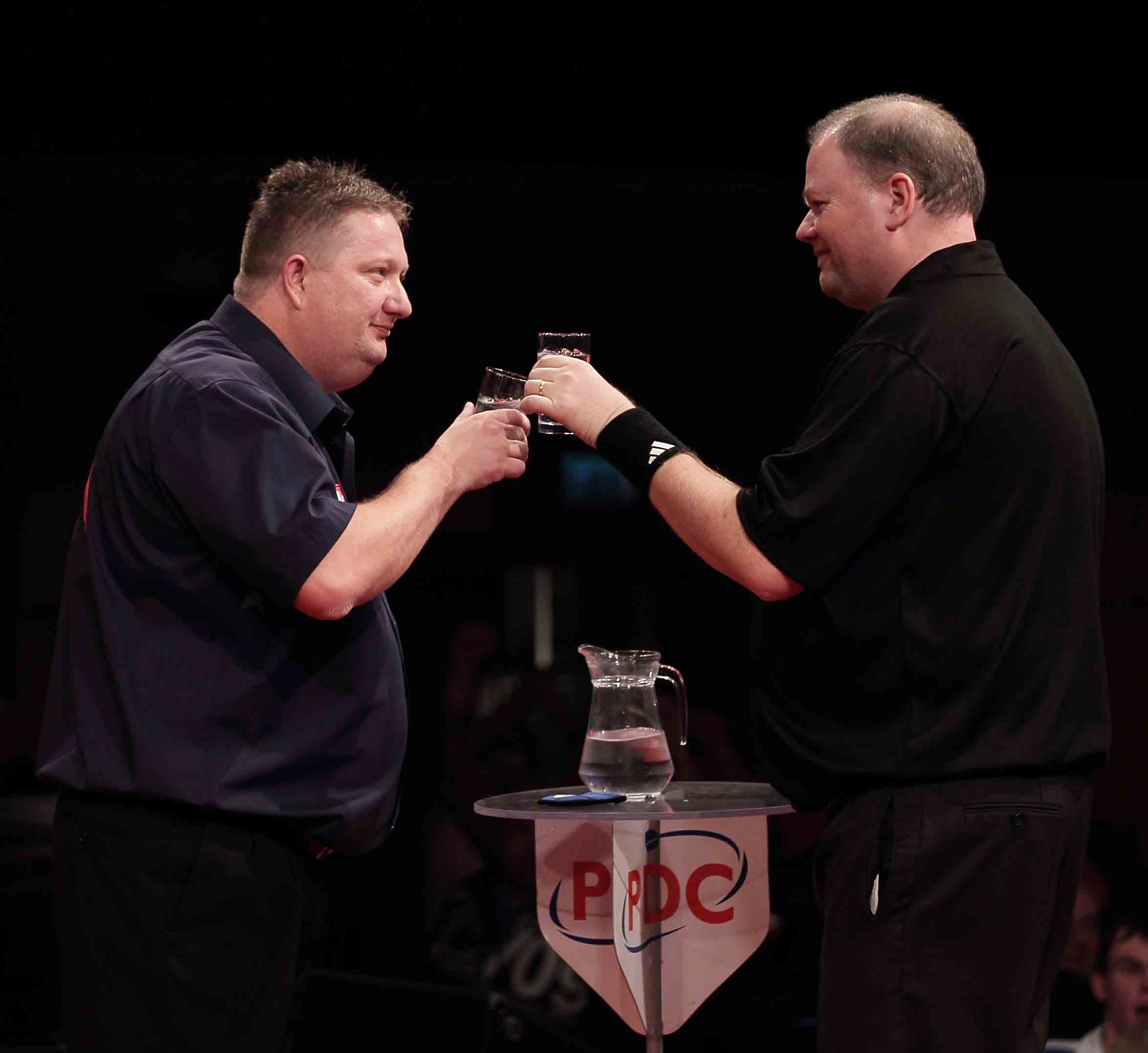 One still sometimes hear that players admit they don't practice any longer - do you still practice?

Oh yes, I do. I've got a den in the garden for it. When you come and visit me you'll not realise I am a dart player at all. In the house I am only Colin Lloyd - your friend. When I am Colin Lloyd the dart player I got to the den. All trophies, everything is in the den and the dart board as well.

And for how long and what do you practice?

That depends. Sometimes it is only ten minutes. I try what I feel is a problem and when it works practice is over because I think would I go on for a longer time might be that could be bad for my confidence. But sometimes of course I get stuck and practice for a long time. I've got a lot of friends where I live and we often play together.

Do you still set yourself goals?

Not really. You see I've won a lot of tournaments. I've done it all, Premier League as well, I've seen it all -but of course I love to win and I always want to win.

How much does experience help?

Experience is very important. You can see that at those young players. Some of them just think they are already there and get presumptuous. Only recently I told Arron Monk it's not you talent people respect. It's only because of your father. I don't help those youngsters. They have to realize they have to work hard should they really want to get there. They will not get it as a gift. And shouldn't they learn that they never will have success. That's like the beautiful and sexy young blond girl who thinks everybody has only waited for her. But it is not like that.

What would be your advice for them?

Work hard, practice for long hours, commit yourself with head and heart and prepare yourself it will be hard. And better learn a profession as well. You can't be sure you'll succeed. 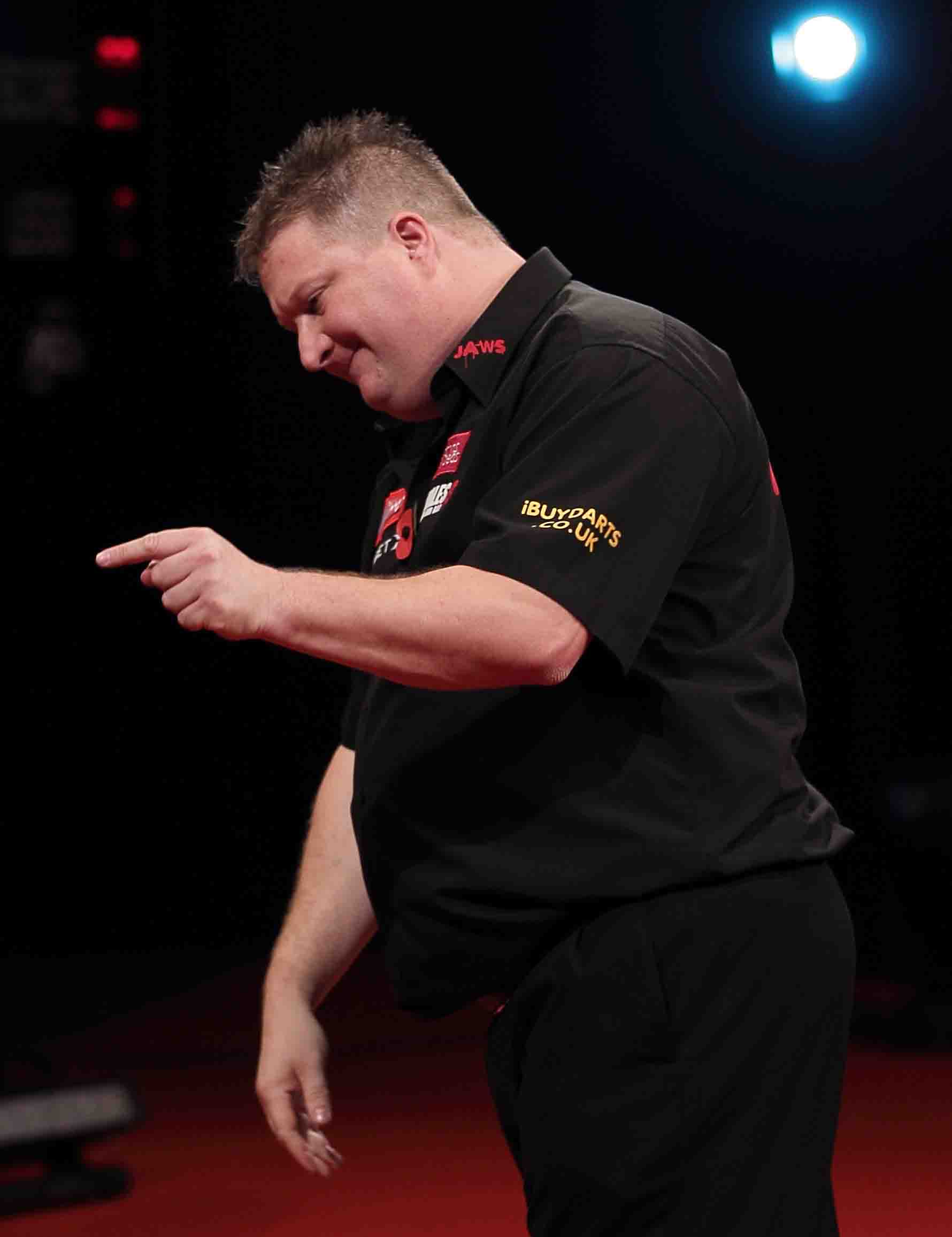 So you've got a profession?

I am a baker but I can work with horses too . And I was in the building profession. So should it happen I couldn't play anymore or don't enjoy it anymore I would have several options. But I hope I'll be around for a lot of years to do what I really enjoy.

And you wouldn't help the youths?

Oh - should somebody come and ask for advice I of course would help. And I've always some money in my pocket for charity or to help a person out. I am an amiable person - I only get wicked when it's justified.

What do you think is your special strength?

Probably that I know what to do. And that I totally accept myself and enjoy myself.

I think it is the people, the camaraderie. I've been everywhere in Asia, in America in Canada in Europe and I've friends all over the world - people I like to talk to. 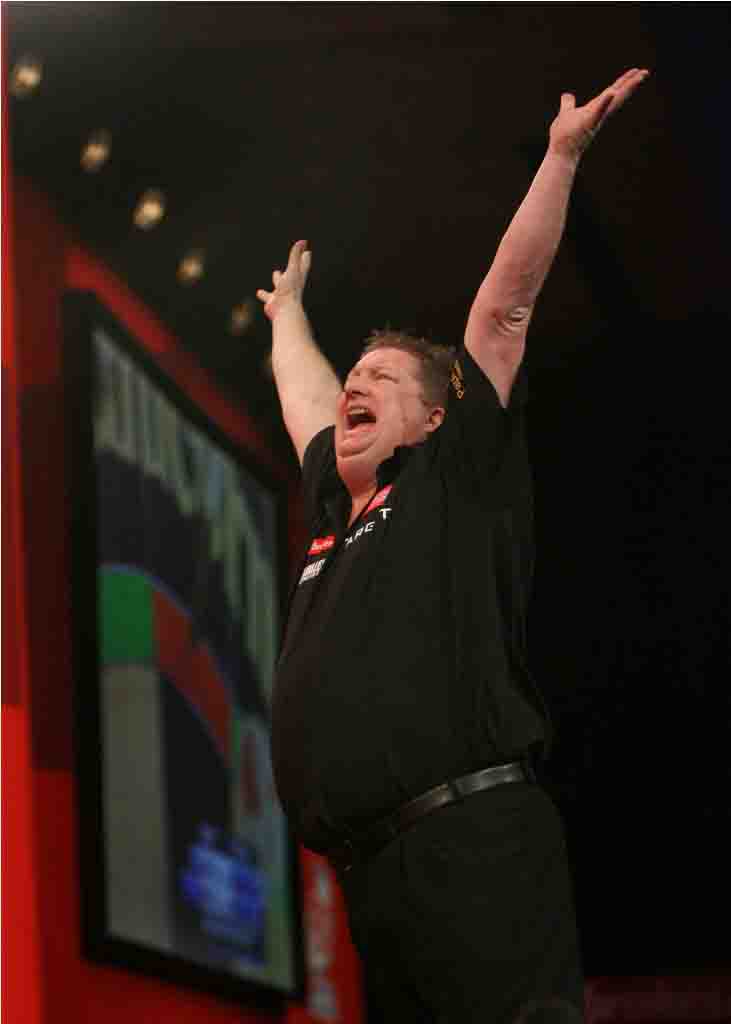