Russian darts player Aleksandr Oreshkin, born 1961, for the first time stood on the stage of the Alexandra Palace in 2016. He had qualified by the Russian World Championship qualifier. His strange throwing action caused a stir and seemed to distract his opponents He won his preliminary round match against Paul Lim and in the first round brought Mervyn King at the brink of defeat. 2016 and 2017 he war together with Boris Koltsov Team Russia in the PDC World Cup. As well in 2017 he together with Boris Koltsov won the WDF World Cup pairs. Oreshkin qualified again for the PDC World Championship 2018 where he'll meet in the preliminary round German Kevin Münch. 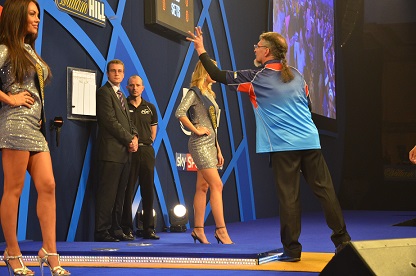 Was it this time especially difficult to qualify for the PDC World Championship?

Yes, it was more difficult this time, and it is reflected by my matches' scores: 6-5; 6-5; 6-1;6-5; 6-5. The final match against Boris proved the most difficult, but I was luckier and even checked out with the bull's eye twice.

How many players took part in the qualifier?

Who would you say is the best Russian darts player?

Although there are quite a few good players in Russia, I consider Boris the best of the best. And very often, when he fails to win, the fault is with the organnizers. In many cases, organization of tournaments is pretty poor.

You recently won together with Boris the WDF World Cup pairs. Do you often play together?

Normally, Boris and I play as a team some 5 to 6 times a year. And even more seldom do we play against each other.

Is the sport of darts something "exotic" In Russia?

I cannot say that darts is something exotic in Russia. It will be quite enough to watch Russian TV series -almost in every office scene you will see a dartboard on an office door or wall. Of course it will be premature to say that darts is a mass sport in our country, but the programs of many multi-disciplinary competitions include it.

How did you get into contact with the sport?

My introduction to darts was quite accidental. I was invited by my friend's family to attend a get-together, at which some other families were present. The hosts prepared a program, which included a kind of sports competition: air rifle shooting, strength demonstration, and darts. I did not win any prize then, but I fell in love with the sport. I bought a dartboard and a set of darts and started throwing. There was nobody to teach me, that is why my throwing technique (if it can be called 'technique') is so weird. And I had to travel 100 kilometers to compete with other players. I lived in a small village near Vladivostok then. Only in 2005, I met some darts players from Khabarovsk and started taking part in relatively big tournaments. It is at those tournaments that I came to understanding that my throw was incorrect. But it was too late to make any drastic changes in my technique. 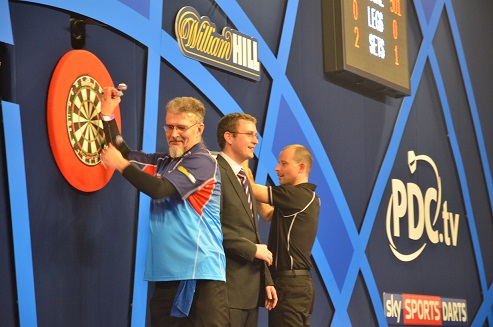 Is there a national darts organization in Russia?

There is a Darts Federation in Russia. It comprises around 1000 men and 500 women who practice and compete regularly. The number of occasional players is more or less the same. The Federation is not league-based, but some regions do have leagues. I know that darts leagues exist in Moscow and Rostov-on-Don, for instance.

Do you play in a league or a club?

I am a member of the Finnish SM-league and play for Pakki Darts Club. My team plays in the major league, and we were Number 3 in 2016/17. The Finnish league comprises 2000+ active players in total. The women's league is much smaller.

Do you take part in tournaments in Russia?

In Russia, I regularly compete in ranking tournaments organized every month in St. Petersburg. I also always try to take part in National Championships and Cups of Russia. And of course, I compete in the tournaments of the Finnish SM-League.

Are there many tournaments in Russia?

The National Darts Federation of Russia organizes about 30 tournaments. Four tournaments are held by the EADC. These events include the Championship and Cup of Russia for individual players and pairs; a championship for teams; and there is also an American cricket championship.

What about taking part in the SDC Nordic and Baltic Tour?

St. Petersburg darts players always take part in tournaments held in Finland and Baltic states. However, it is pretty expensive to attend competitions held in other Nordic countries. But for players from other regions even going to Finland is not always affordable. Let alone the visa issue.

Where do you play darts in Russia? In pubs and clubs?

In Russia, people play darts in bars and clubs. However, bar-based darts is not well developed. May be except for St. Petersburg, Tver, Rostov-on-Don, and Moscow. That's it. As to darts clubs, they exist in all the cities where there are regional darts federations. There are also darts sections in some sports schools for youth and children in Moscow, Novgorod, Yekaterinburg, Rostov and some other cities. A pub league is shaping in St. Petersburg. About 30 teams joined it within a year. Russia's best players play in Hard Rock Darts League. One of its founders is Boris. League's most interesting games are broadcast via you tube.

Where do you buy your equipment?

In Moscow, there are four stores selling equipment for darts. There is also a darts store in St. Petersburg. Many players buy darts stuff in the Internet. Until recently I bought my equipment online too. 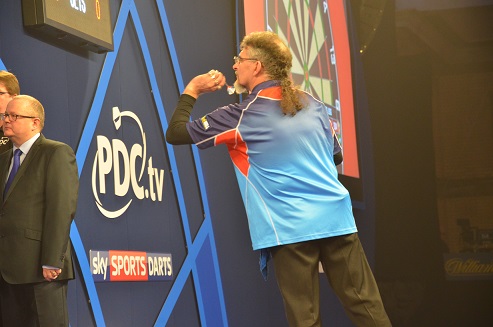 Currently, I am using One80 Reflux 20g darts. Some time ago the company customized this model for me. And I am using nylon flights too. In the past 5 years, I tried approximately 30 models, but almost all of them had drop-shaped barrels.

As far as sponsorship is concerned, One80 supplies me with darts, but I do not receive any sponsor's money. The government does not provide any financial support either - darts is not soccer or hockey.

What is or was your profession?

I've been retired for more than 10 years, but before I was in the military.

How good are the players in Russia?

Russia's strongest players have an average score of about 70, although at international tournaments they score up to 80+. This can be explained by poor organization of tournaments.

Have you got a practice partner or do you prefer playing alone?

In St. Petersburg, I do not experience any problems with practice partners. I normally practice with a partner between 2 and 3 hours, 2 to 3 times a week. The rest of the time I practice on my own.

How much do you practice?

I practice between 5 and 7 hours a day, both in my club and at home.

I develop my training plans myself. I was taught how to do in as a cadet.

Had you any idols when you started to play?

Did you know all the British legends?

Is darts televised on Russian TV?

What was your first tournament?

My very first tournament was the Championship of Primorski Krai in Vladivostok. The final lasted 3.5 hours without a break - 9 sets of 9 legs. 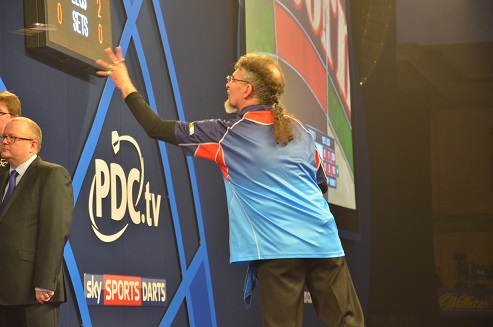 It seems sport psychology and sports science get more and more important in darts...

I am really interested in darts psychology and physiology.

Do you have any goals or dreams in darts?

My dream is to become Olympic Champion in darts. I hope that someday darts will become an Olympic sport.

Could you imagine to by a professional darts player?

Of course. I'd love to become a professional darts player, but it is not possible in Russia. In my country, this sport cannot be a reliable source of income. And I cannot afford moving to Europe or traveling there on a regular basis.

How will you prepare for the World Championship?

The only difference between my preparation for the PDC World Championship and my routine practice is in that I am not traveling to take part in tournaments organized in other cities. Russia is a huge geography.

Are tournaments played on stage or on floor in Russia?

In Russia, almost no competitions take place on stage as we see it in other parts.

What is your goal for the World Championship?

I like to demonstrate a good game to a large number of spectators. Unfortunately, I don't always manage.

Do you always were long sleeves and sunglases?

I normally wear a compression sleeve. It helps me. Before darts, I practiced track and fields, power lifting and target shooting. And I suffer from a lot of arm, leg, and back injuries. And my glasses are not sunglasses. They have replaceable prescription glasses for different lighting conditions, although I can play in regular transparent glasses. 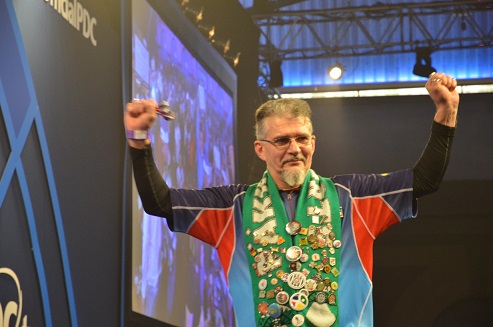 Do you practice as well in long sleeves and with the glasses?

Normally, I practice wearing my sleeve and glasses, but not always.

What I like in darts most of all is the friendly environment. And the lack of age-related barriers.

Do you have any hobbies outside of darts?

I don't have too many hobbies. Maybe, fishing, reading books - Mark Twain, Jack London, John Galsworthy.). I am also fond of cooking.